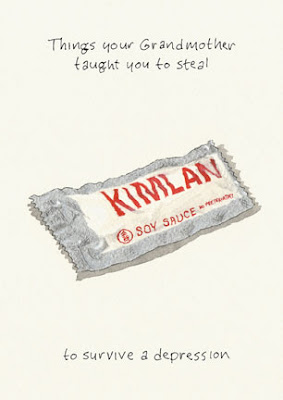 Artist and writer Paul Madonna blends his skillful drawing and wry wit to shed an ironic light on a creative means to make it through these tough economic times. In a nod to depression-era ideals, Madonna uses his keen eye for detail to create affordable drawings of “free” condiments he’s collected recently from cafés, deli counters or directly from tables during the blue-plate special. Toothpicks, soy sauce, mini-creamers, honey packets are just a few of the items rendered in Madonna’s articulate pen, ink and watercolor drawings.

Find Paul Madonna’s Things Your Grandmother Taught You To Steal To Survive A Depression on display in BellJar’s gallery from May 20 through June 17, as well as featured in the Believer magazine’s upcoming June issue. BellJar’s gallery serves as a nice compliment to the eclectic collection of gorgeous little things in the Mission District storefront.

Paul Madonna writes and draws two weekly strips, All Over Coffee in the San Francisco Chronicle, and Small Potatoes on theRumpus.net. His first book, All Over Coffee, was published in 2007 by City Lights Books, and the first edition of his new drawing book series, Album, will be published this November by Electric Works. Paul's drawings and prints are shown in galleries and museums, and this summer a five-year anniversary show of All Over Coffee is on display at the Jewett Gallery in the San Francisco Main Public Library. On top of it all, in 1993 Paul was the first ever Art Intern at Mad Magazine, for which he proudly received no money.

Exhibition: Things Your Grandmother Taught You To Steal To Survive A Depression

Libations: BellJar will have resident bartenders Sean and Ian serving up lovely Libations-